Home » A Touch of Ireland with Sammy & Brian 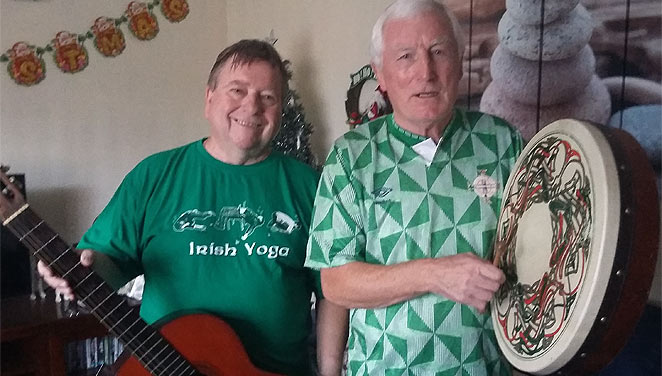 A Touch of Ireland, the long-running WOW FM program broadcasting every other Sunday between the hours of 10 am and 12 noon, has touched the hearts and minds of the Irish and their friends in the outer west of Sydney for over a quarter of a century.

Noel O’Donohue, an enterprising Dubliner, started the program in the first year of the station’s broadcast. Shortly afterwards he was joined by Belfast man, Jim Clarke, another passionate advocate of all things Irish. And they remained a team for over twenty years, building a loyal following during that time.

Sammy Beggs started appearing on the program a few years ago and he took over the helm when Jim and Noel stepped aside as regular presenters. He was joined by Rebecca Benson and, later, his daughter’s partner P.J. Brown on the panel for a time before the present team of Sammy Beggs and Brian Mitchell became a regular fixture every other Sunday during the past couple of years.

From the beginning, the program has connected with the Irish of the Penrith Valley by relaying news from Ireland, and local events of interest to the listeners.  The marking of important milestones in the lives of our audience- their birthdays, weddings, engagements and the passing of friends and loved ones, has always been a feature of the program- usually commemorated by a musical request.

Music is at the heart of the program. Irish folk and traditional music is justly famous the world over for its liveliness, its pathos, its recording of historical events and social trends- and, of course, its humour. The Irish term craic (pronounced “crack”) is crucial to understanding the ethos of the program. Wikipedia defines craic as a term for news, gossip, fun, entertainment, and enjoyable conversation, particularly prominent in Ireland.

The show’s dynamic features a bit of light-hearted banter between the presenters as they take requests over the phone (at least half a dozen calls per show, and often more). Sammy reads out items of interest from various sources and Brian relays sometimes esoteric information about the songs and tunes they play. Recently, Ann King, has joined the boys to inject an Irish language component into the show.

The show will continue to evolve, no doubt, as time marches on- but it is sure to retain its foundational principles of passion, compassion and, of course, the craic!