On Friday Night the 3rd of November WowFM presenters and listeners enjoyed a lively night’s entertainment at the Blacktown Workers Club as part of an arrangement with our sponsor (Alan Mann Productions). 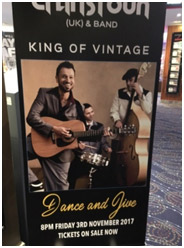 We were invited to give away 25 double passes to our listeners along with 20 double passes to WOW-FM presenters. The star of the evening was Si Cranstoun who began his career as a busker in London, and finally hitting the big time with a million-pound recording contract. He started writing his own songs and performing when he was 16 and for years he struggled to make ends meet as he played on London’s streets.

At one time, Prime Minister Tony Blair when passing by threw 30p into his hat which was laying on the side walk beside him. But success evaded him until 2013 when he finally landed a breakthrough deal with music giants Warner.