If an award was to be given to “WOW-FM’s most dedicated listener”, then Rani Embuldeniya would be a front runner to win that award.

In fact, there is probably not a more dedicated community radio station listener in the whole of Australia than Rani (pictured here with WOW-FM presenter, Mark Gould, WOW-FM’s Vice-President Malama Psarianos, and one of Mark’s telephone assistants, Andrew Yeend, on a recent visit to Mark’s “Baby Boomer’s Jukebox” show – Tuesday nights from 7pm to 9pm).

Rani began listening to WOW-FM 8 years ago. She has her radio almost constantly tuned only to our station, and listens to almost every WOW-FM program. She told Mark that she adores the music he plays (golden oldies of the 1950s and 1960s) and she has hardly missed a single one of his shows in the last 8 years. While visiting the studios Rani was also delighted to catch up with Malama (Malama’s Greek night out program – Wednesday nights 6pm to 7pm), to whom she has met before and listened on many occasions.

Rani originally came to Australia from Sri Lanka. Her brother Sunil and sister-in-law Neomi, always listen to Mark’s program in Colombo, Sri Lanka, and their sister Ranmali, listens to Mark in Singapore. During Rani’s visit to WOW-FM, Mark allowed Rani to go on air and send a cheerio to Sunil, Neomi and Ranmali, and Rani told Mark that her family overseas would have appreciated it so much. She said this is what makes community radio so special, and what sets it apart from the big commercial stations.

WOW-FM cherishes its association with devoted listeners like Rani, Sunil, Neomi and Ranmali. 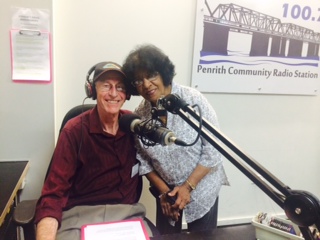