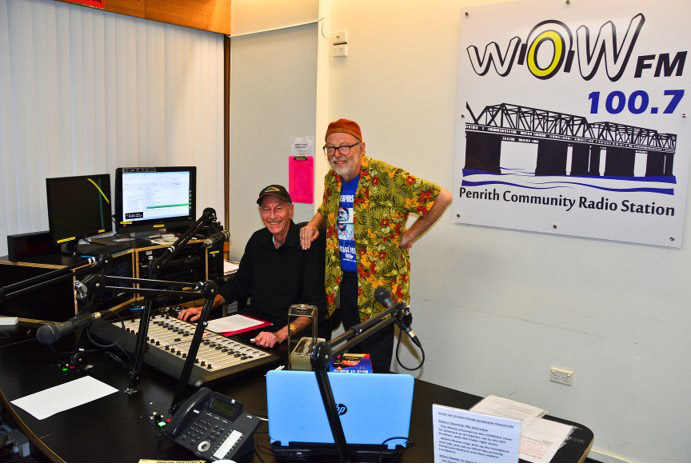 It took Mark several weeks of negotiations to lure Glenn to a community radio station for the first time. Before that, Glenn’s radio appearances had been only on Australia’s top commercial stations. Glenn has also appeared on television many times.

Glenn’s achievements are too numerous to mention, but here are just a few of them. He has been won the British “Rock Brain Of The Universe” competition three times. This competition is open to entrants world-wide. Glenn was the Australian editor of Billboard magazine for over 20 years. He has managed some of Australia’s most famous rock bands. He has written 16 books about rock music, written articles for more than 200 magazines, and written the sleeve notes for more than 500 record albums. He has appeared regularly on Kerri-Anne Kennerley’s Today Show on television. He has been heard as an in-flight presenter on Qantas flights for more than two decades.

Glenn (pictured in this article with Mark in the WowFM studio) won the inaugural Australian Travel Writer of the Year award in 1995, and again in 2000. His radio career is legendary. He started off at 2JJ (which soon became Triple J) and then moved on to the MMM network. He is a member of the Australian Recording Industry Association (ARIA) Hall of Fame Advisory Committee.

Recently, he was honoured by the Queen in her Queen’s Birthday awards, being awarded the Order Of Australia, for his contributions to the entertainment industry.

Mark has received a flood of emails from WowFM listeners following Glenn’s riveting commentary during the show. Glenn enjoyed the more personal touch that community radio has over commercial stations, and told Mark he would be delighted to visit his show again.