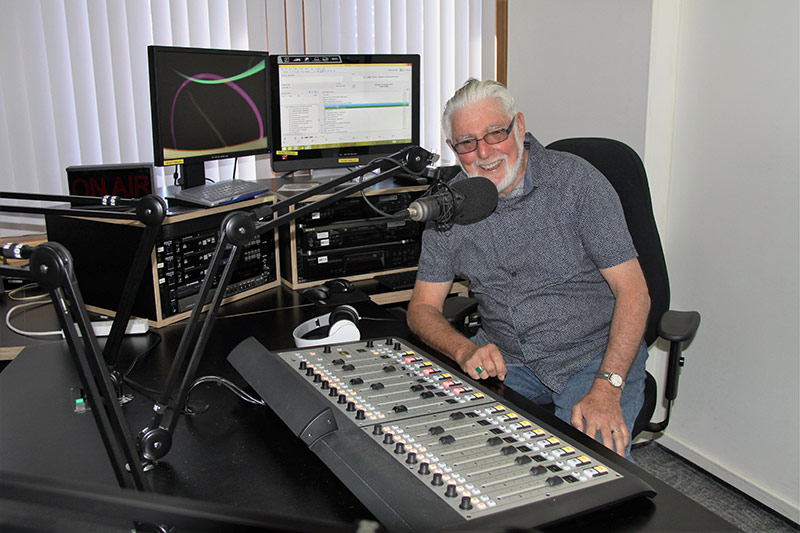 My interest in radio dates back to 2002, at the time a friend of mine was presenting ‘Good Morning Country’ from the Community Broadcasting Association of Australia’s studio in Alexandria on Tuesday mornings.

It was Annie Zietarski whose husband Stan, said to me, you should go with Annie to help present ‘Good Morning Country’ on Tuesdays, you would be really good at it. So I did, for the next 10 months, every Tuesday I was there. It was and is still great fun, and a great experience.

The seed was planted, I stopped going to ‘Good Morning Country’ after 10 months, but I really had the radio bug. It was suggested that the Blue Mountains Community Radio RBM 89.1 were looking for presenters. I went to the station one Saturday night (the worst night possible due to a severe storm) and knocked on the door. The door was opened by Ken Quinell (RBM 89.1 President) and after introductions, I told him the reason for my visit. A week later I got my spot, alternating with another presenter on Saturdays 10pm through to Midnight on the ‘Late Night Radio’ program. At first it went badly, but like everything you do, the more you do it, the more comfortable you become. I presented the ‘Late Night Radio’ program for 3 months before being given the program ‘Turn Your Radio On’ from 8pm through to 10pm Thursday nights.

Later a friend suggested that 2RRR 88.5 FM Gladesville were looking for a country music presenter on Sunday morning 6am through to 8am. You are required to attend the 2RRR 3 month (one night a week) comprehensive radio training course before being allowed on air. I completed the course and was given ‘Sunday Morning Coming Down’ 6am through to 8am. I resigned from the Blue Mountains Community Radio RBM 89.1 and began presenting on 2RRR in 2003.

I have since joined the team at WOW FM 100.7, becoming a presenter in June 2016. I have been welcomed to the WOW FM 100.7 team and love being part of a progressive station. After completing WOW FM’s training I started presenting ‘Country Rocks, Bluegrass Rules’ which can be heard each Thursday 12:00 noon through to 2:00pm.

Along with my interest in community radio, I Like Isobell Impell (another presenter on WOW FM) am a member of ‘The Blue Mountains Ukulele Group’, a fun family-friendly club, a bunch of great people who meet to play ukulele together. We hold regular ukulele workshops, open mics, strums, jams and gigs in Springwood, Blaxland, Penrith, Werrington and elsewhere in the Blue Mountains.